Amelia was diagnosed with thyroid cancer in March 2017. After two surgeries, and while undergoing radiation therapy, Amelia (then living in Canada)  googled all things cancer. She was, in part, looking for medical information but also searching for other forms of comfort and support. As well as finding our charity, she also found Ellie’s Friends (run by Maggie’s Centres) and Treatment Bag, organisations which provide cancer-friendly gifts and services.

Amelia’s cancer, as for so many suffering from the disease, was far more than a medical condition, it was becoming a way of life; an ever present uncertainty. The need to connect and seek comfort from others was vital. Our offer of a simple letter was perfect for Amelia – something to distract, bring comfort and give a sense of connection – reducing the feeling of isolation so often experienced.

Amelia remembers that the writer of the donated letter she received in January 2018 wrote about the flowers in their garden. It reminded Amelia there was life going on beyond her cancer, more than just the doom and gloom which pervaded her life.

As a child Amelia had written letters to friends and penpals. The donated letter inspired Amelia to reach out again to people by letter, to connect in that special and powerful way.

‘I felt much more connected to people,’ she said. ‘And it felt good to share experiences. Letters are so different to social media – the writer has gone to more effort.’

Amelia kept her donated letter in a box so she could reread it. It was a constant reminder that a stranger had given her a gift, and from this she took great comfort.

Earlier this year, now living in the UK and still receiving treatment, Amelia decided she wanted to give back some of the comfort she had received. She wanted to remind other cancer patients that kind acts were going on and that they too could benefit from them.

‘I wanted to give them a pick-me-up.’

The writing, over the next two months, of 56 donated letters to be given to other cancer patients, had a positive impact on Amelia.

‘There’s something very creative in thinking what you can fit in an envelope. And as you hunt for the uplifting anecdote or sentence, you are at the same time uplifting yourself.’

‘For so much of the time you are going through cancer, you feel you are asking for enough from the medical profession, but your needs go so much beyond that. We need to keep connected, feel supported, allowed to smile. A letter does all this.’

If you would like to know more about Amelia’s story, she is very happy to be contacted here

WE'RE FINALISTS FOR CHARITY OF THE YEAR

YOUR HELP GOT US THROUGH LOCKDOWN 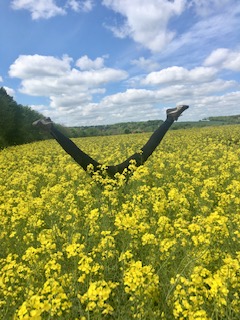